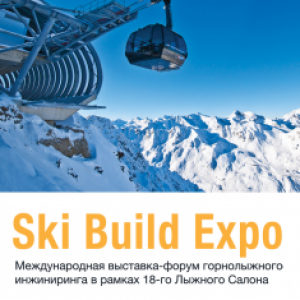 Ski Build Expo is ’s unique project dedicated to mountain engineering technologies and operation of ski resorts and sports facilities. In the year 2011, this expo event was organized for the thirteenth time around. SKI BUILD EXPO introduces a unique format of interrelation and intercommunication among the market players of the mountain engineering industry, as well as mountain resort design, construction, and management. The exhibition featured the leading companies of the construction branch – “GORIMPEX”, “SKADO”, “ROSENGINEERING” and others – in total over 40 companies from , , , , , , and .

An indisputable success of Ski&Board Salon 2011 was the solution of separating the Ski Build Expo segment altogether as a dedicated trade-specialists-only area. The planning and organization of Ski Build Expo area went on in close cooperation with Interalpin Trade Fair (), that promoted Ski Build Expo among the European companies, some of which consequently became Ski Build Expo exhibitors.

Even though Moscow Ski&Board Salon was divided into industry segments (Sports, Tourism, Ski Build Expo) in the previous years, the year of 2011 saw the complete realization of this industry-specific division. Technically, the entrance to Ski Build Expo area was organized through the turnstiles “SKIDATA Freemotion" and "Vario.Gate.” provided by Gorimpex Company, automatically registering the professional visitors; Ski Build Expo area had two such entrance/exit points. This feature helped to more accurately estimate the number of guests at the event (the number of special invitations distributed being 980, the number of passes - 6500).

The extended business agenda of the exhibition has highlighted the most topical issues of mountain resorts infrastructure in .

Ski Build Expo also hosted the conference “Topical issues of the development of skiing industry in ” with the participation of (1) Federal Agency for Tourism of Russian Federation (2) Russian Mountain Industry Union (3) regional representatives. The conference brought up the issues of competitiveness of Russian resorts: over the past 20 years, the number of ski resorts in the has increased by about half – up to 150, and in the short term this number is expected to further be on the rise. Against the background of the leading countries of Europe, the figure is quite high, although is considerably inferior to the absolute industry leaders - and France (respectively -5.3 and 2.7 times). Data by ROSTOURISM

Decisions of the panel discussion of the international exhibition Ski Build Expo 2011 included:

(1) proposals to amend Article 48.1 of Russia’s Town Planning Code on “potentially dangerous, technically complex and unique objects”, (2) address to the Federal Service for Ecological, Technological and Nuclear Oversight with proposals for a procedure for obtaining RTN permission to use the equipment and registration in the register of dangerous industrial objects (chairlifts and ropeways) (according to the Union of the ski industry). The company "Rosengineering" held public consultations in the framework of Ski Build Expo, while the non-profit organization “Union of Ski Resorts of Russia” organized the conferences named (1) “Guidelines for creation and management of ski resorts in Russia” and (2) “Practical issues of operation of ski resorts” - with the support of “Ski - Resort – Consult” Company.

The organizing team maintains an ongoing dialogue with the representatives of the market and potential customers throughout the year:

The partners of Ski Build Expo are allocated a dedicated profile at www.skiexpo.ru and thereafter have an opportunity to publish their news in SalonExpo Newsletter.

A few months before the start of the exhibition, exhibitors of Ski Build Expo began to send out invitations to their customers to pass into the Ski Build Expo area, providing thus a good turnout of the professionals and representatives of the market in particular. This move allowed, on the one hand, to cut off the casual visitors, and on the other hand, significantly raised the 'quality' visitors' audience that almost 100% consisted of the potential buyers of the product offered by the Ski Build Expo exhibitors.

Ultimately, organizers received a fully-fledged B2B expo event, which provided an opportunity for decision makers to do business dialogue in the business-like and at the same time relaxed atmosphere.

According to the survey of the participants of Ski Build Expo the three days each stand was visited by an average of 40-70 trade specialists.

In addition to the stands, the SKI BUILD EXPO area had a café with free drinks for exhibitors and a conference hall with non-stop presentations and workshops.

The stands of Skado, Gorimpex, and Wintersteiger companies became one of the most beautifully-looking ones.

Considering the apparent success of Ski Build Expo 2011, the organizers of “Moscow Ski&Board Salon” and “Interalpin” plan to increase its area in 2012, 1.2-1.5 times as well as take a number of steps aimed at further promoting the project in the professional the medium.