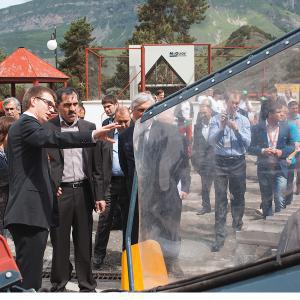 From 13 to 15 of August, 2013, the city of is going to host 's first selling exhibition of restored snowgroomers PistenBully (Russian). The questions of Salon Expo E-Newspaper are answered by Sergey Orlov - Deputy General Director for sales of the general representation office in the and . (On the photo, Sergey is on the left. Ski Build Expo - , Armkhi. Photo: Ruslan Peretyatko).

- How did the idea of organizing a fair-sale for restored snowgroomers come around? Such an event will take place in for the first time...

- Yes, the fair of snowgroomers will be organized in (and in the CIS, for that matter) for the first time around. The idea of such an event did not just come out of the blue. Our primary goal was to liven things up at the secondary market within this country, introduced the so-called "trade-in". The owners of snowgroomers would operate them for decades, and, instead of changing the outdated machine with a new up-to-date one, they would run the old snowgroomer down to the ground, watch it die in agony - until it would inevitably turn into a monument to the innovations of the late '80's. In the course of time any mechanisms exhaust their resource, and no matter how excellent their state used to be, after 20 years of operation, the probability of failure is extremely high. And - for the owner of mountain-skiing complex there is nothing more expensive and frustrating than a dead snowgroomer stuck in the middle of the slope. In recent years we succeeded in striking a dozen or so deals in trading in the used machinery, and then restoring it and selling it back on the market again. This system is now working! The next logic step would be widening the range of our services. This is how we came to the format of the fair.

- What are the benefits of the restored snowgroomers in this particular country?

- The first benefit is their price, of course. There is no substitute for a new high-quality snowgroomer - but for the low-budget ski resorts, which constitute 90% of this country's pool, this is the only option. The quality of restoration is a different issue, though. Most of the domestic companies that publish their offers on selling snowgroomers simply relay the offers from foreign companies and put up the photos from their European stocks. The data about the operating time, the year of release and even exterior view it is insufficient for the formation of objective conclusion about the state of machine.

In 2012, our company purchased 12 snowgroomers from four leading European companies specializing in re-selling and restoring snowgroomers. All 12 units required 5-10 thousand euros for upgrading them to an acceptable state. Due to this reason, in the spring of 2013, the company SKADO Techno simultaneously bought 17 machines (for timely troubleshooting, restoration and forming a compelling price for the client). At the Samara fair, one will be able to get competent advice from qualified personnel, as well as to examine each of the machines for himself.

- What makes such public events different from the standard day-to-day work? How do they raise the brand awareness?

- With time, the German machinery PistenBully does not lose its quality, so in this respect, selling it is relatively easy. In fact, these babies DO sell themselves. What we do, however, is we provide support for this brand on the of and , and connect the manufacturer with its client - according to their preferences. But we do not have to "persuade" anyone - everybody in the industry knows what great machines these snowgroomers are.

For me, in any kind of work, the creative component is important, and something new that you bring into this or that endeavor. We try to move forward and develop the trade-in market of snow groomers in . For me, this has long since become a goal, and I am surely moving toward it.

- Exhibiting at Ski&Board Salon and Ski Build Expo - what benefits does it give your brand and how does it help you get new contacts?

- In my view, today Moscow Ski&Board Salon is the only large and informative trade show that is organized in and the CIS. No matter what organizers of other expo events do, they just cannot pull the audience of professional visitors to their side - no fair comes even close to Ski Build Expo. Moscow Ski&Board Salon is the flagship in the information area of not only the "snow sports" but other kinds of sport as well.

Our alliance with the Moscow Ski&Board Salon is non-accidental, we represent the leaders in the specific category and we want to work with the leaders. What we, actually, are doing! I am sure that our further collaboration will be very fruitful, and results will exceed all possible expectations!

General representation of PistenBully in and

Kassbohrer Gelandefahrzeug AG is the leader in manufacturing and supplying the snowgroomers for skiing slopes, biathlon tracks, classic ski runs, BeachTech machines for cleaning of the beaches, as well as arious special vehicles for transporting people and supplies to hard-to-reach areas. The PistenBully machinery occupies more than 70% of the world market in servicing the slopes and ski runs of varying degrees of complexity.

The company "SKADO Techno" is the General Representative of Kassbohrer Gelandefahrzeug AG, the exclusive carrier of warranty from the manufacturer and supplier of new and used snowgroomers PistenBully and Formatic on the of and .

We successfully cooperate in the area of supplying and servicing PistenBully snowgroomers with most ski centers in and CIS countries. Our partners are Olympic venues and private sports centers, small chalet and stadiums for skiing, biathlon schools, oil companies and entrepreneurs who appreciate the high quality of German all-terrain vehicles.