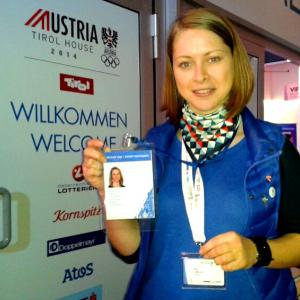 Dear friends and partners of Moscow Ski&Board Salon, Ski Build Expo, and Salon expo! In this issue, we give the floor to our long-standing partners, linguaXtrem Company, who are happily sharing their Olympic impressions.

Our company linguaXtrem was very happy to visit the Winter Olympic Games Sochi 2014.

Together with the official Austrian Delegation Maria Danilova took part in the conference “Sport and Tourism in Russia” that was organized by the Moscow Office of the AussenwirtschaftsCenter Austria from 20th till 23rd February 2014 in the Austria Tirol House in Krasnaya Polyana.

But even more interesting is to compare the trips of linguaXtrem to Sochi in 2013 with this journey 2014 to the Olympics. We'd like to share with you some interesting comparison photos of Krasnaya Polyana, “Rosa Khutor“ and “Gornaya Karussel” from 3 journeys of linguaXtrem: in January 2013, March 2013 and February 2014.

This article you can also find at our website www.linguaXtrem.at (German and Russian languages)