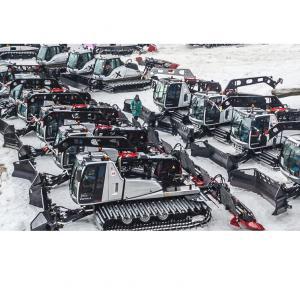 Organized by "Gorimpex" Group, the selling exhibition of "Prinoth" snow groomers took place at "Rosa Khutor" resort in Sochi from 26 to 26 of March. The exhibition presented thirty Prinoth snowgroomers, previously involved in the preparation of the slopes for the most important sporting competitions - competitions in snowboarding and freestyle skiing in the XXII Olympic Winter Games and a para-snowboard - within the framework of the XI Winter Paralympic Games.

The guests of the event, the leaders of the ski resorts from various regions of Russia, appreciated the benefits and the quality of Prinoth machinery. This comes as no surprise because even the used Prinoth groomers were professionally restored and prepped for operation in December 2013 at the Prinoth facility at Telfs, Austria. The operation of all the machines was carried out by the coordinated team of the specialists of Prinoth and Gorimpex Group.

The impressive demonstration of Prinoth groomers was carried out in the finish zone of "Rosa-Khutor" terrain park, where in February of 2014, the Olympic competition in snowboard and freestyle skiing were conducted, and in March the para-snowboard competition was held. At the event, the guests got the opportunity to witness the possibilities of the showcased Prinoth machinery that performed various operations on the slopes at different angles.

“Recently, we observe the tendency of increased interest to the used snow groomers - says the chief of the "Prinoth" caterpillar machinery department of Gorimpex Group Roman Shlyakhov - for many of our clients, a new groomer is a too expensive purchase, while, on the other hand, the used machines are not as reliable which leads to increased service and maintenance costs. What we offer, on the other hand, is high-quality groomers that have been through the authorized restoration. With the operational properties that are comparable to the new machines' properties and the scheduled service costs, these groomers are sold at prices that are considerably less than the new machines are sold at".

The Prinoth Trade Show in Sochi 2014 became the efficient venue for the direct communication between the representatives of Russian mountain resorts, the manufacturer Prinoth and Gorimpex Group, the exclusive representative of this trademark in Russia.

The requests for purchasing the renovated snow-grooming machinery "Prinoth" and organizing private demonstrations thereof are welcome at info@gorimpex.ru of with the mark “Prinoth Sale”