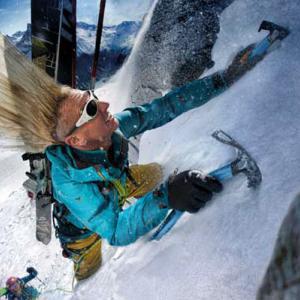 International Ski&Board Salon team is happy to introduce the legend of skiing and alpinism Glen Plake (USA), who will be the presenter in Moscow Gostiny Dvor (25-27.10.2013).

A long time ago Glen's punk hairdo became the visit card not only of this hooligan ski bum, but the quality certificate of outstanding skier and alpinist. In 2010 the name of Plake (on September, 9 he will celebrate his 49-th birthday) joined the list of sportsmen in US Ski&Snowboard Hall of Fame.

Glen’s list of achievements includes starring in famous Warren Miller ski movies, many ascents in Europe and Himalayas, and not only ascents, but successful ski descents by new routes… And an impressive list of awards.

On September 12 2012, the ascent of Plake's team to Manaslu (8 156 m) ended as a tragedy – the avalanche claimed the lives of nine mountaineers. Glen was lucky to survive, and considers it a sign of destiny.

On the other side, this sportsman is a living evidence of true ski freeride. He guides ski school and White Sessions project (in the framework of it, he instructs freeriding groups for riding on the undeveloped slopes of Chamonix, France, where he spends half of the winter season).

This is not the first visit of Glen Plake to Russia – in winter of 2008 he appeared as a judge for Freeride World Tour by Nissan (in Krasnaya Polyana, Olympic resort-2014). "Not a single freerider is guaranteed against the avalanche danger, - says sportsman. – Please, think about your safety when riding. Equip in the right order!"

During his visit to Moscow, Plake will take part in Moscow International Ski&Board Salon in Gostiny Dvor (200 meters from Kremlin). He will participate as a presenter of his own ski projects, meet the fans and give an autograph-session. And certainly take a look on beautiful Moscow sights! So, if you chance meet at the Red Square the smiley guy with white Mohawk hairdo, whose riding you have admired for years, don't think that it is a hallucination. This is for real!