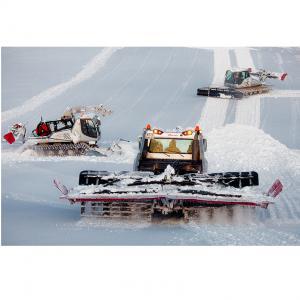 "Gorimpex" Group of Companies, the official representative of HTI Group (Poma, Prinoth, Demaclenko) on the territory of Russia and the CIS, organized and conducted the "demonstration event" HTI World Sochi 2013 that took place at "Rosa Khutor" mountain resort in Krasnaya Polyana October 3-5 2013.

Part 1 / business - available on this link

During the impressive snowgroomer show, the "big four" of the best groomer drivers from Russia, Italy, Ireland, and the USA within but 15 minutes prepared the perfect slope and erected a huge ski jump.

Also, the guests of the event got the opportunity to get a test drive of the "flagship" snow groomer Prinoth Beast, guided by the experienced coach from "Gorimpex" company.

Continuing their tour, the guests ascended the resort's highest pint - Rosa Peak at a height of 2320 meters. The impressive panoramas of the resort left no one indifferent, in spite of temperature of approximately -10 degrees.

In conclusion, the guests were in for a gala dinner and a concert by the State Academic Ensembe of folk dance "Nal′mès", which was as vivid and memorable as the whole event program HTI World 2013 Sochi.