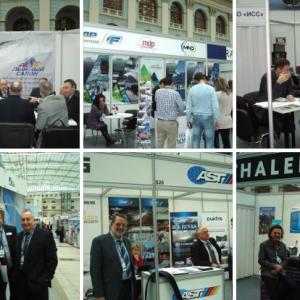 
Technically speaking, the Ski Build Expo segment is part of Ski@Board Salon situated right after the main entrance. The area has a closed perimeter and is accessed in exchange for the trade visitor\\\\\\\'s contact information.

Well, this is the dry and "official" description. However, if we drop the formal style and cast the technicalities aside, we can come right out and say that in 2012 Ski Build Expo became the true heart and soul of Ski@Board Salon! It was this particular area that always bustling with activity, it was here that the business contacts were ceaselessly being swapped, it was here that the entire industry gathered for interesting and effective work.

This year, Ski Build Expo opened its doors a day earlier than the rest of the exhibition - on the 1st of November. The idea of starting one day ahead of the air was originally suggested by the long-standing friend and partner of Ski@Board Salon, the project manager of Interalpin trade fair Stefan Kleinlercher - and the idea proved to be a massive win. While beyond the confines of Ski Build Expo the stands of the sport and travel segments were still being finished, the work in Ski Build Expo was already underway. This change of schedule went a long way to increase the effectiveness of exhibition work. On the one side, it helped to cut off practically all the "casual" visitors (as we remember, the entrance was via a special invite or a business card), and, on the other side, this solution helped to increase the number of trade specialists that came to visit the exhibitors" stands (for a trade specialist, visiting an exhibition is part of their job, and job is done on the work days, not on the weekend).

For two seasons on end, our fair welcomes the "Interalpin" companies: Bellutti, Duktus, Ast, Axess, Thaler,Wodl. The year, it was decided to build no partitions between the interalpin stands, which resulted in what looked like one big nice collective stand.

The Ski Build Expo segment featured not only the manufacturers, dealers and suppliers, but also the representatives of the industry press - the magazines ISR, Seilbahnen International, "Sport Academ Reklama" publishers.
On the a cafe worked, while in the mini-conference-hall there were ongoing presentations and workshops. Yet another time, Ski Build Expo proved its usefulness to the industry. We are looking forward to seeing everyone again in 2013!