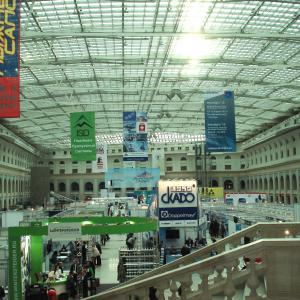 \'s historical building of Gostiny Dvor exhibition center has played host to Moscow Ski&Board Salon 2012, the event that is traditionally considered to be the start of a new skiing season in .

At the inauguration of the trade show, Head of the Department of Tourism of the Committee on Tourism and Hotel Business in Moscow, I.Kozlov, awarded the Certificate of Merit "For contributions to the development of tourism and hotel business" to General Director of Moscow Ski&Board Salon, Mikhail Musinyants.

Every year, in late October/early November everybody who is interested in the winter sports industry, traveling, active lifestyle, and sports, gather together in Gostiny Dvor at Moscow Ski&Board Salon. Traditionally, the trade show consists of three constituent parts: the Ski Build Expo area (mountain engineering, design, construction, and operation of ski resorts), the travel segment, and the sports stands combined with side events. In 2012, the show featured over 200 exhibitors: ski resort construction - 31%, sport industry - 35%, travel + ski resorts - 31%.

This year, practically all of the mentioned branches have shown steady and quality growth. First of all, the Ski Build Expo area continues to expand - as compared to 2012, it grew half again as big. And this is a good sign not only for the oncoming Olympics but for the industry on the whole - the more mountain resorts are equipped with modern machinery in this country, the more hotels will be built, and the greater the inflow of skiers will become. Consequently, the competition among the hotels will grow, and ultimately this will make a positive difference in the life of an average skier. To unveil our future plans for a bit, we will say that Next year Ski Build Expo will undergo a few changes that hopefully will be appreciated by the trade specialists as well as the b2c visitors of Moscow Ski&Board Salon.

The travel segment of the fair inevitably makes the grade - during the public days, the exhibition stands of travel companies were literally swarming with people interested in skiing vacations. Getting updated on the new skiing destinations, winning bonuses and giveaways - all of this one can do at Moscow Ski&Board Salon, and a lot of experienced visitors take the advantage of the opportunity.

As usual, quite a few exciting moments were given to us by the side events program - Moscow Ski&Board Salon featured a rock-climbing competition ("speed" division), organized by Russian Rock-Climbing Federation; cross-country ski sprint organized with the support of Intersport Company and Demino cross-country ski resort; skateboard contest organized by Homeplace School and Moscow\'s Federation of Ski and Snowboard.

One of the most exciting events of the fair was the snowboard competition (Olympic discipline "Jibbing/Slopestyle") on the man-made mountain with natural snow. We will not bother you with the details of how challenging it was to organize the production of real snow in the historical building of XVIII century, but ultimately it was all worth it - several thousand people turned up to watch the country\'s best riders do their thing.

What can be said about the show in general? In spite of the fact that year after year the organizers are hearing something in the vein of “Salon is not quite what it used to be anymore…”, it still gets a very good turnout of professionals and interested general public. And it must be admitted that cannot boast any other similar even that would so organically combine the business program, the expo part, and the exciting side events.

This year we can see the qualitative leap of the target audience: the traditional old-fashioned “skier with a rucksack” gives way to the dynamic young people that will soon explore Russia’s and Europe’s ski resorts, buy airplane tickets, skis, and boards – and there’s no denying this fact.

According to estimates, in 2012 the number of visitors of Moscow Ski&Board Salon, has grown by approximately 25% which only goes to show that Russia’s skiing industry is alive and kicking.

The team of Moscow Ski&Board Salon in Gostiny Dvor carries on with the preparation for the next year’s even – in 2013, the show will take place for the 20th time around! We are playing to win, so brace yourself to new surprises, exploits, and victories! Victories that we will achieve together! United we can stand up to any challenge!

- Presentation of “Ertzog” Company together with France Montagnes and ATOUT France: "French mountain resorts for the professionals of the Russian market”